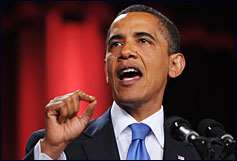 President Obama's realistic speech called for a new beginning to move forward in the 21st century.

Addressing the Muslim world from the historic Cairo University, President Obama pursuing the aspiration of change, called upon for a new beginning, in a sense that the myths and tensions in the US relations with the Muslim world can’t be resolved in a single speech, but all need to go ahead with joint efforts and mutual respect.

President Obama received huge applause from his Muslim audience in the Arab world when he started with a Muslim traditional greetings; Assalamu Alaikum. One from Audience shouted “we love you”, when President quoted Holy Quran more than once while talking about extremism, peace and women rights.

Beginning with the vital role of Islam in developing a civilization, President Obama admitted there have been stereotypes about Islam in the West following the incidents of 9/11 that killed over 3000 innocent people. But its a fact that the mass-illiterate population of the Muslim world is much influenced by the auto-generated propaganda that the West led by America is at war with Islam. Due to lack of literacy, undemocratic societies and unbalanced development, the majority common people in the Muslim world, particularly Afghanistan and Pakistan, believe West is indirectly fighting a war against Islam. President Obama said “the US is not, and will never be, at war with Islam.” He said Islam is part of America and mentioned the religious freedom that a Muslim enjoys in America.  Obama mentioned, “there is a mosque in every state of our union, and over 1,200 mosques within our borders. That is why the U.S. government has gone to court to protect the right of women and girls to wear the hijab, and to punish those who would deny it.”

President Obama was right when he talked of the propaganda used by very few extremists justifying their violent and terrorist activities. He admitted the mistakes in starting a war of choice in Iraq. He made it clear the US would draw all its forces by 2011, beside continuing assistance to built Iraqi security institutions and economy. Again another myth/propaganda by extremists that US military will remain forever in Iraq to rule the region and take away its oil.

He also focused an important part of his speech on Afghanistan, making clear that the US forces would be drawn from Afghanistan, once security prevails. He also denied the common myth in majority Muslim population that America seeks permanent military bases in Afghanistan, as part of its self-interested and expansionist military empire. This is what every second Muslim in Pakistan and Afghanistan believes.

The Muslim population of Arab world, Afghanistan and Pakistan have to understand that its not America’s war fighting the potent minority extremists that, as Obama mentioned, have killed Muslims more than people from any other faith across the world. What we see in Pakistan nowadays is an absolute lesson. Today majority public opinion in Pakistan has totally turned against extremists, this is what we see, read and observe in Pakistani media. Here at our side in Afghanistan, we also need to promote awareness about the fact that we have to fight our own war against extremists who want to rule us in the way they deem  life and interpret Islam. It was under the brutal rule of Taliban before their ouster that thousands of innocent civilians were killed across Afghanistan. These are the facts that we have to spread the word among the mass illiterate population to isolate the very few extremists and militants.

Why would America continue an unnecessary war at the cost of lives of its young soldiers?  It has been the war on terror at our lands, for our security, with the extremists that we experienced a glance under them for some years.  It should be us to mention, what President Obama did in Cairo, that the US and international efforts have made us able to build our own economy, security and democratic institutions.

Addressing the most important source of tension between the Muslim world and America, President Obama clearly said the US does not accept the legitimacy of continued Israeli settlements. But also urged the ultimate fact that Palestinians must abandon violence and Hammas must admit Israel’s right to exist. He said the only resolution to the issue is through two states, its in the interest of the world.

Another problem in the mass illiterate population of the Muslim world, particularly Afghanistan and Pakistan is that majority beleive Holocaust is lie. I remember when i was in high school, our teachers used to share their “intellectual Muslim” thoughts that Yahood (Jews) and Muslims will never be able to cooperate and Jews are permanent foe of Islam forever.  We should get of out of the rubbish myth and accept that Jews did suffer the worst atrocities in their history. Being in Pakistan during childhood, i saw it even written in textbooks that Israel is the ideological enemy of Muslim world. Of course such propaganda projections were due to the state-policy of its existence, but today we all need to go forward for a change in the 21st century.

President Obama reiterated his country is ready to move forward with Iran, under mutual respect and a better future. He admitted the fact that every nation has the right to have nuclear technology for peaceful energy usage. But Tehran has to assure the principals of NPT and ensure the world about its peaceful intentions to avoid a race of nuclear weapons in the Middle East.

As expected, President Obama’s address to the Muslim world sought a new beginning. The US leader has moved forward, now its our turn to move even a step further. We should mark this century with the aspiration of change, and build a human civilization of peace, harmony and progress based on mutual respect. It much depends on how much President Obama is affirm on his words to implementation.

The basic reason behind the stereotypes in the Muslim world about West is due to undemocratic societies and illiteracy. What the US and West need to do is to promote democracy in the non-democratic Muslim Arab world and other Muslim countries. America did support dictatorial elements in Islamic countries in the past, but now there should be a real “CHANGE”. Arab world needs to not only move forward economically, but also socially with democratic values in order to avoid the so-called clash of civilization.